THE CRISIS:
Public Dissatisfaction with Government

Numerous polls show that the American people’s confidence in the Federal government, especially Congress, has reached startlingly low levels. Americans say that they perceive elected officials as listening to and being influenced by special interests, campaign donors and lobbyists, but being largely out of touch with the people.  They believe this contributes to polarization and gridlock and, most importantly, undermines elected officials responsibility to do what is best for the nation as a whole.  Research shows that public’s perception is largely correct—there are substantial gaps between what the government does and what the public thinks it should do.

Americans perceive that this is a violation of a kind of ‘contract’ between government and the people that goes back to the founding of the Republic. Indeed as Alexander Hamilton said, “A government ought to [be]… free from every other control but a regard to the public good and to the sense of the people.”

This low level of public trust is a problem for many democratic governments, suggesting that there is truly a crisis for democracy.  It plays an important role in the success of ‘populist’ outsider candidates who use the perception of governments’ failure to serve the people to justify ‘illiberal’ ideas and policies.

THE PEOPLE’S DEMAND:
A Greater Voice for the People as Whole

Americans today believe that the people should have a greater voice in government.  They are not asking for direct democracy, but they do think that elected officials should listen to and be responsive to the people they represent considerably more than they are now.

Americans believe that if their elected representatives were to be more responsive to the people:

Of course, most Members have numerous contacts with constituents.  But 8 in 10 Americans say that the existing methods that Members use to understand their constituents are not adequate.  Many of the contacts are actually prompted by special interests or advocacy groups.  No matter how hard Members work, they only interact with a tiny fraction of the hundreds of thousands of people who are their constituents, and that fraction will not necessarily be a representative sample of the people as a whole.

Furthermore, there are many issues before Congress about which people are not informed enough to give meaningful input to their representatives.   Nonetheless, Americans want to know that their priorities and values are coming to bear on those issues as well.

1. Give the People New Means to Advise Representatives

In specific districts and states where a Congressperson is interested in hearing from the people they represent as a whole, VOP recruits citizens to form a panel.  The panel is representative of the population as a whole and provides input to the Congressperson on current issues. 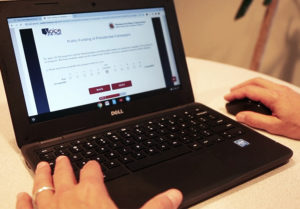 The panel members go through an online process—called a ‘policymaking simulation’—that the puts the citizen in the shoes of the policymaker by simulating the process they go through when coming to a policy decision. Working online, panel members are:

The simulations are developed by the University of Maryland’s Program for Public Consultation and reviewed by experts from across the spectrum of opinion to ensure that they are accurate, balanced and well-argued.

The responses from the citizen panel are aggregated and scientifically weighted to the demographics and partisan affiliation of the district or state, providing a clear picture of the views of the people as a whole.

2. Convene Meetings Between Citizens and Representatives

Once the citizen panel has gone through the policymaking simulation process, their Member of Congress is invited to a meeting with some of the panel members.  At that meeting:

Because some members of the citizen panel may live in outlying areas or may not able to make the in-person meeting, there will be two options for them as well:

Don’t miss notifications about upcoming VOP events and new survey releases. Click here to sign up for regular email updates from Voice of the People!

Connect With Us Online!