After the moderate success of the UN’s Millennium Development Goals, countries around the world committed to achieving the even more ambitious Sustainable Development Goals (SDGs). US commitment to provide foreign aid to solve world problems has remained steady over the last few decades, and continues to be the highest among donor nations in absolute terms, though relatively low in terms of a percentage of GDP.

Briefing and Arguments About Foreign Aid and SDGs

Respondents were given a briefing about the UN SDGs, that went as follows:

As you may know in 2000, all of the member countries of the United Nations (including the US), plus international agencies and international non-profit aid organizations came together and agreed on a set of worldwide goals to achieve by 2015.  This included goals of:

They then evaluated three pairs of arguments for and against the US increasing its foreign aid, in order to solve global problems. All arguments were found convincing by a majority. The pro arguments did much better among Democrats, and the con arguments much better among Republicans. For all arguments except one, about eight in ten from one party found it convincing, while just around half or less from the other party did. The only argument to get robust bipartisan support included facts about the outcomes of foreign aid -- in saving and improving lives.

The first pro argument spoke to the ‘moral obligation’ the US has to improve the lives of the disadvantaged around the world, and how relatively little the US contributes relative to most other developed countries. Around six in ten found this convincing, including eight in ten Democrats. Just 36% of Republicans were convinced. 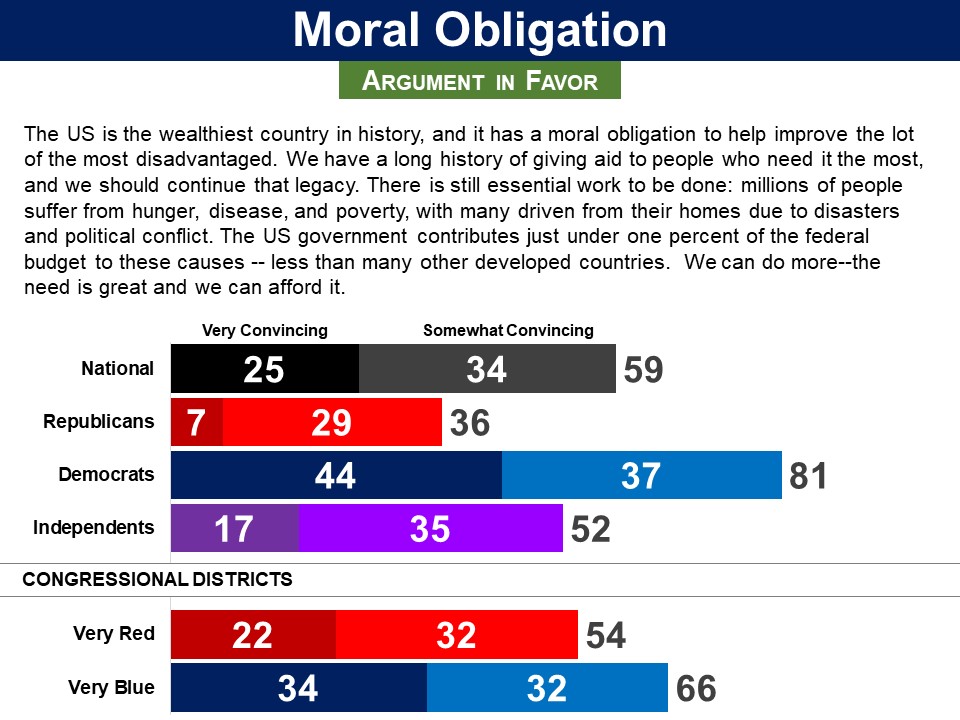 The first con argument spoke to the ‘moral obligation’ the US has to improve the lives of US citizens first and foremost, and how many expensive problems the US is currently facing. This was found convincing by seven in ten, including 88% of Republicans. A bare majority of Democrats (52%) felt the same. 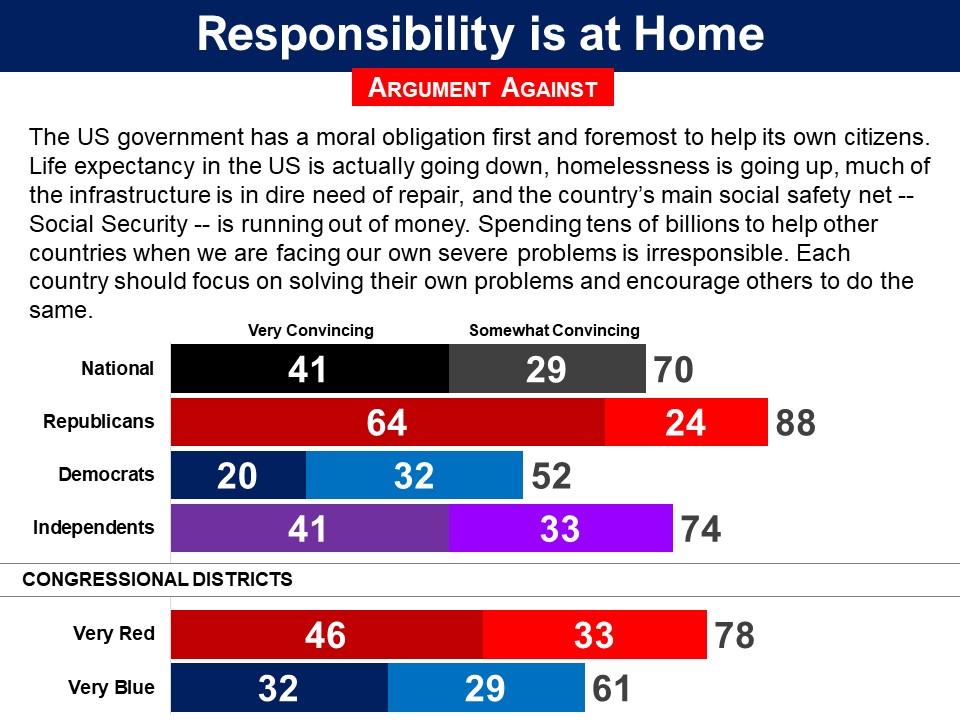 The next pro argument underscored how improvements in other parts of the world are an ‘investment in the future’ that help the US in the long run, by expanding markets and increasing stability. Seven in ten found this convincing, including 86% of Democrats. Republicans were split with 51% convinced. 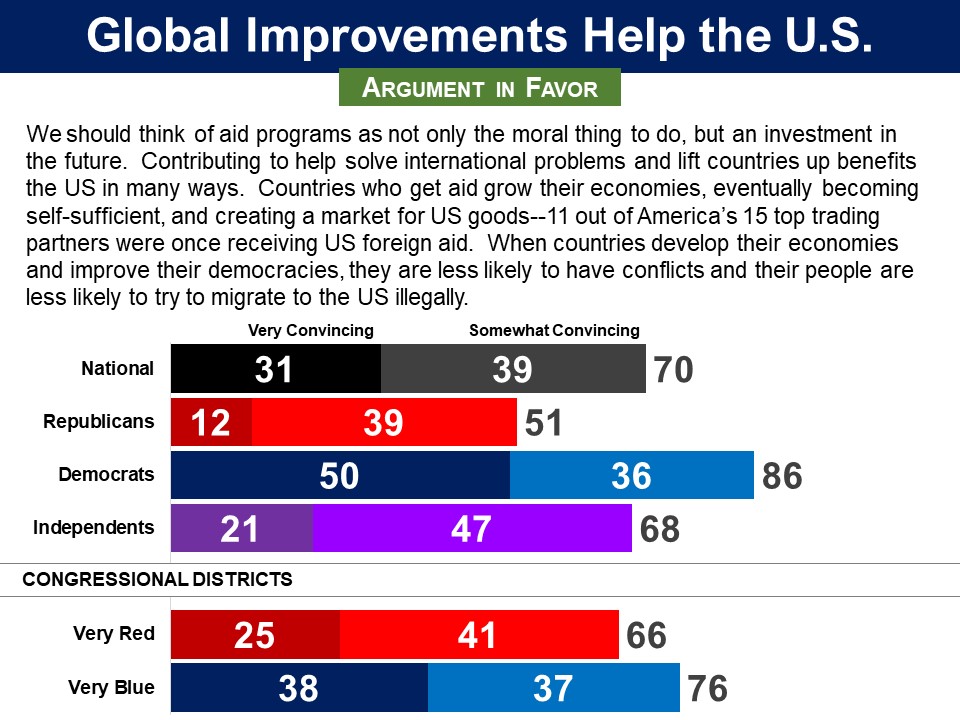 The next con argument stressed that aid is not very effective, and that it can be pocketed by foreign officials, and that before countries get aid they need to ‘clean up their act’. This was found convincing by seven in ten, including nearly nine in ten Republicans. A slight majority of Democrats agreed with 52% convinced. 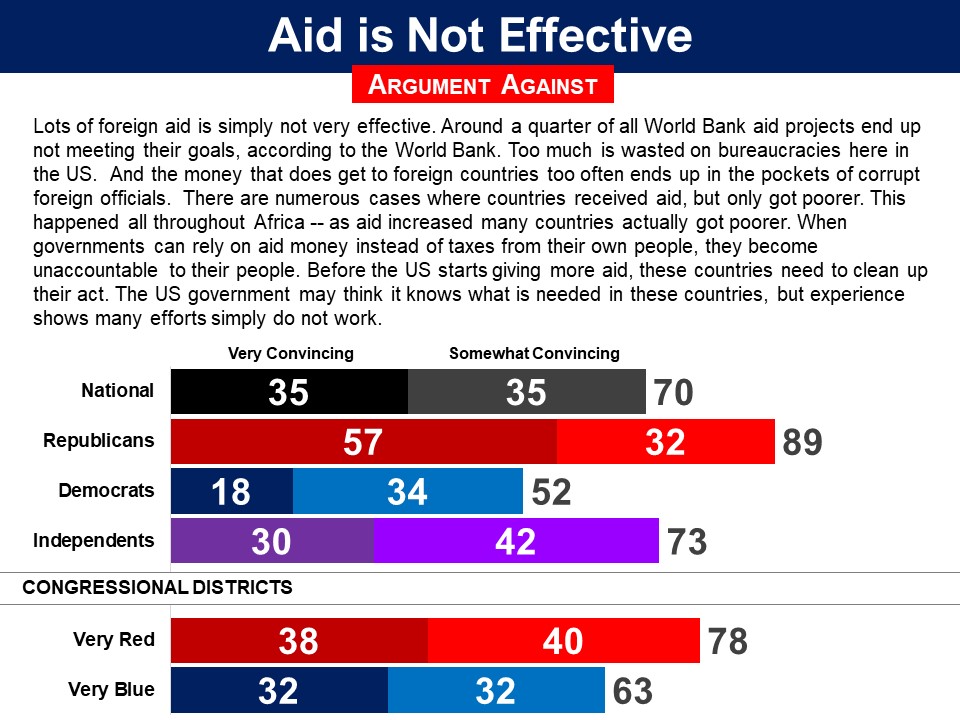 The last pro argument highlighted the positive impact of aid throughout the last few decades, from lives saved to children educated. Three in four found this convincing, including six in ten Republicans and nearly nine in ten Democrats. 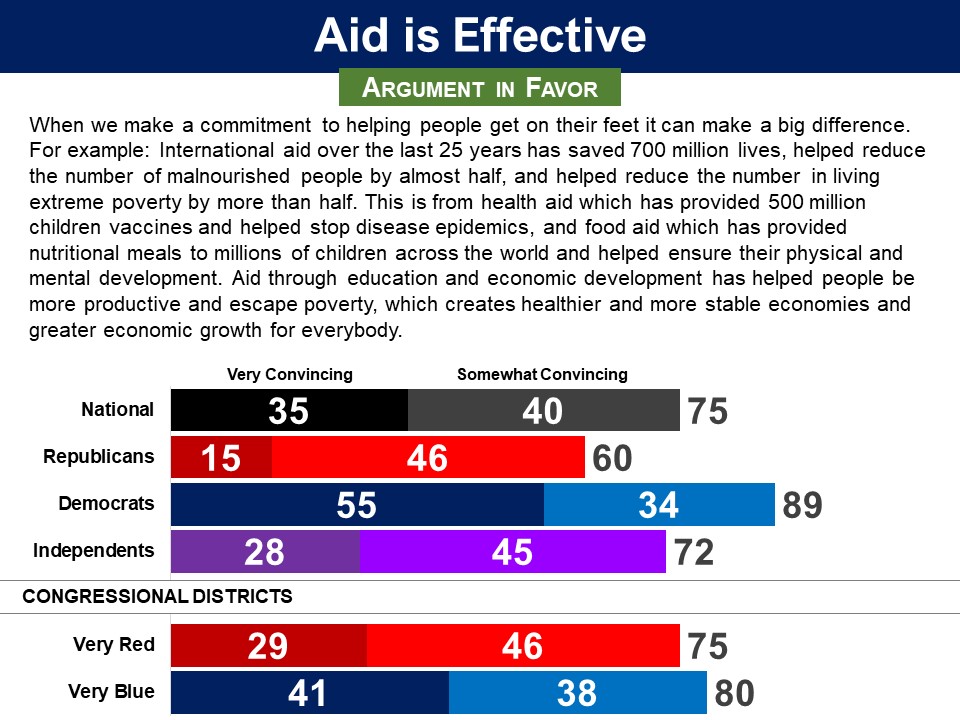 The last argument emphasized the point that aid can create dependency, can make governments unaccountable when they no longer need to rely on their own citizens, and can hurt local producers. This was found convincing by six in ten, including 83% of Republicans. Just 36% of Democrats concurred. 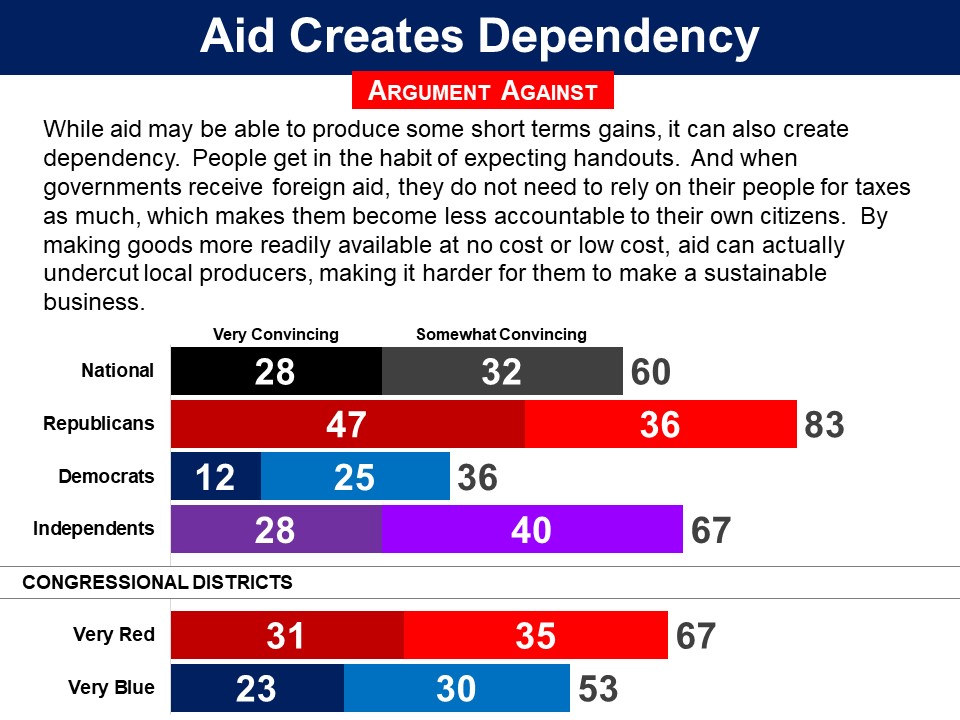 After evaluating arguments for and against increasing US foreign aid, respondents evaluated five SDGs. For each, they were told about the problem in need of solving, how much was needed to achieve the SDG, what the US’ share would be, and how much this would increase their taxes. It went as follows:

A proposed framework is to have all high-income countries contribute the same amount in terms of the percentage of their economy.  That means the countries with larger economies would pay more.  But all would be paying the same percentage of their economies. For each goal we will tell you the estimate for how much additional aid will be required to meet that goal and what the US share would be, based on the size of its economy compared to the other high-income countries.

There are various ways that the US could raise the necessary funds including increasing the US debt, cutting spending or raising taxes.  For the sake of this exercise we will assume that the funds would be raised by increasing all Federal taxes equally (except those committed to Social Security and Medicare).  This would include the amount of Federal income taxes you pay.  So, say that to meet a certain goal, the total of US taxes would need to go up 1%.  This means that the total of your income taxes would go up 1%.  So, say your income taxes are $5,000 a year. A 1% increase would mean that you would pay an extra $50 per year.